Guilin is known as the pearl-city of China because of its astonishing natural beauty. The city has flowing rivers, enormous vegetation including the "Forest of Sweet Osmanthus", beautiful sceneries and many more. But the reason why tourists are attracted more to this city is the Guilin Mountains, hills, and its karst topographies etc. The Hills, Mountains, and Karsts of the Guilin city are formed in unique and different shapes which makes them attractive and beautiful enough to awe the tourists. This article covers the features of Guilin Hills, Mountains, and Karst, how are they formed and how can visitors get there conveniently and cheap. What are the Features of Guilin Majestic Mountains?

Karst Topography and Formation of Mountains and Hills

The mountains and karsts of Guilin are made up of soluble rocks like ‘limestone, dolomite, and gypsum.’ These soluble rocks are easily breakable by acids. Even the acids present in rainfall or the water of river and lakes can break-down the limestone, gypsum and dolomite rocks. As a result, of water flow over the rocks, the acid in the water breakdowns the rocks and over the time sinkholes, caverns, and subterranean drainage systems are created in the rocks. When the waters flow over these sinkholes, it gets accumulated under the ground, which accelerates the erosion rate. After a long time (millions and millions of years) when much of rock surroundings are eroded by water acids, the vegetation starts growing, resulting in a much fast erosion and hence the Mountains with sharp peaks, and jagged edges are formed.

In addition, as the water collects underground, and erodes the underground rocks which result in the formation of caves and underground streams and pools. One of the Guilin’s most famous karst caves is the ‘Reed Flute Cave - the Palace of Natural Arts’. It is a natural beauty of multicolored lights inside the cave, reed growing outside the cave, has more than 70 inscriptions written in ink and abundance of stalactites, stalagmites, and other rock formations. Most Famous Attractions and Where to Find Them?

The Yao Shan Mountain is the highest Guilin Mountain around the city. It is located 12 km from downtown and known for its beautiful scenery and the view from the mountain. Tourists can see the whole Guilin city as well as witness the beauty of sunset from the top of Yao Shan Mountain. The mountain has its own golf course as well as the cable chairlift, and a road. Along the path there are temples, shrines, golden statues, wheeled Toboggan Run and of course the wildlife including Rhesus Monkeys, birds and butterflies. This mountain has the highest peak of all the other Guilin hills and mountains, and got its name because of its cat shaped peaks. It is located in the northwest Xing'an County, about 90 kilometers north of Guilin. The prominent feature of Maoer Mountain is its nature preserves. It is known for a large number of azaleas, crystal clear water including the Dragon's Pool Waterfall, Paleoanthropological Sites which has the ancient stone tools depicting the Stone Age. The Mountain is named because of a moon-shaped hole, which makes it one of the iconic and scenic sights of Yangshuo China. It is 2.5 km and 1 km southwest of butterfly spring and Big Banyan Tree and 8 km south of Yangshuo. There is an 800 marble stair which is known as "Appreciating Moon Path" which can lead to the Moon Cave. The beauty of this mountain is that the travelers can witness different viewpoints of a "full moon", "half-moon" or "crescent moon" while cycling. This mountain is famous for rock climbing because it is 14 different climbing routes. The Moon Cave is surrounded by peculiarly shaped stalactites, hanging down from its ceiling some of which resembles the Buddha’s warrior attendants, some looks like the moon goddess while some forms the shape of mythical moon palace characters, the ‘jade rabbits.’ It is also known as the Elephant Trunk Hill because it has the shape of a huge elephant with stretched trunk and drinking water. It is the most iconic and popular Guilin Hills, located in Guilin’s south-central area at the confluence of the Taohua River and Li River. There are 2 interesting and beautiful caves at the Elephant Hill, one is known as the Water Moon Cave while the other one is the Elephant Eye Cave.

The water Moon Cave is located between the body and trunk of the elephant which depicts the image of a full moon floating on the water. It creates a beautiful and mesmerizing view on a moonlit night when the lunar light glitters on water wavelets. The Elephant Eye Cave is on the way up of the hill. Myths are that the cave is located exactly at the same place where the eye of an elephant should be. Another highlight of Elephant Hill is the Puxian Pagoda, which was built at the top of the hill in the Ming Dynasty and has a cylindrical shape portraying the handle of a sword. The visiting hours start from 6:00 am to 6:00 pm. It is located at the west bank of Li River and is one of the most famous Guilin hills. The hill has numerous rocks which are broken horizontally which is why it is a good mountain climbing spot. It has 3 popular spots Diecai Pavilion, Wind Cave and Cloud-Catching Pavilion. People can enjoy the panoramic view of the Guilin city, sunsets and beautiful scenery of the gardens and architecture in the surroundings from the top of Folded Brocade Hill. 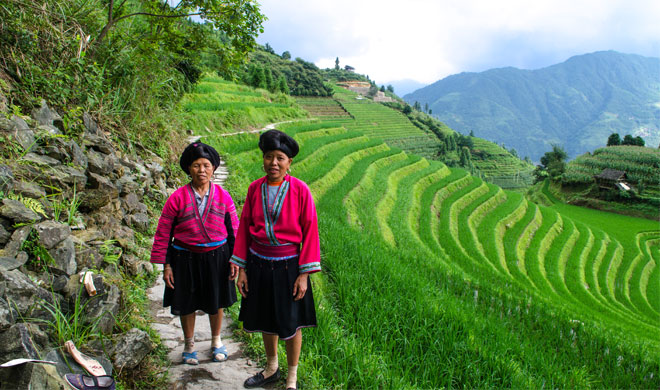