Top 10 Fun Facts about the Great Wall of China

At 21,196 kilometers in length, the Great Wall is the most recognized landmark of China. However, how much do you know about the majestic Great Wall? When was it built and why? Where is it? To answer all your questions, we have listed the 10 most interesting facts about the Great Wall to help you understand more about it before visiting China.

1. Where Is the Great Wall of China Located?

2. How Long Is the Great Wall?

The width of the Great Wall is not as amazing as its length. The average width is 20 feet at the base and 16 feet at the top (6 to 5 meters from the base to the top). The paths allow 10 to 12 people (of medium build) to walk side by side.

Despite being the most important ancient military defense, the  Great Wall is not as tall or as thick as Xi’an City Wall. The average height ranges from 6 meters (20 feet) to 14 meters (46 feet). It was tall enough, however, to avoid northern invaders because they had to ride horses, which made it hard to cross mountains or any barriers. The Great Wall was no doubt effective in protecting mainland China.

5. Why Was the Great Wall of China Built?

There were three main reasons for building the Great Wall in ancient times.

6. How Has the Great Wall Influenced Chinese History?

The Great Wall is not only considered to be great for its strong defensive function in the past but also for its incomparable historic value. In ancient times, the Great Wall of China was like a huge dragon warrior, which spanned across North China. Since the Western Zhou Dynasty (1046–771 BC), it helped ancient China's rulers to protect the safety of the frontier areas, especially from its enemies and Mongol invaders. From the Western Zhou Dynasty to the Ming Dynasty (1368–1644), this huge construction project continued for over 2,000 years. It has witnessed most of ancient China’s glorious and dark historic moments. Although it has little importance for the military today, people believe that it is a great part of the Chinese nation's soul and is a representative witness of China's history.

7. Who Built the Great Wall?

From the Western Zhou Dynasty to the Ming Dynasty, many rulers continued with the Great Wall’s construction. Several emperors played an important role in the history of its construction.

8. When Was the Great Wall Built?

The Great Wall’s construction history has gone through the following ages:

In order to expand territory and protect the safety of the borders, the construction of the military defensive project never ceased in ancient times. The Western Zhou Dynasty was the beginning of the Great Wall's history. The original appearance of the Great Wall was many dispersed walls. The Western Zhou Dynasty wanted to prevent invasion from a threatening tribe named "yănyŭn" (from Northwest China) so the ruler ordered the construction of some high walls in the frontier areas to act as a form of defense. This was the first period of construction for the earlier Great Wall.

The Warring States Period was the first peak period of construction in the Great Wall's history. At that time, China was divided into seven individual kingdoms and every kingdom wanted to become the strongest one. How could this situation change? The only way was to defeat other kingdoms in war. Therefore, as an important and effective military defense project, the construction of the Great Wall was very popular in times of war. All seven kingdoms were keen on building the defensive wall and the Warring States Period became the first peak period of construction.

The Dispersed Walls Were Linked to Become the Great Wall

Emperor Qin Shi Huang (259–210 BC) was not only the ruler who unified China for the first time but was also the first person who united the northern sections of the Great Wall. China is a vast country and how to maintain the safety of such a huge country was always a question for every ruler in ancient times. Emperor Qin Shi Huang was a wise man and he decided to link all of the defensive wall sections. It really was a wonderful idea to use these wall sections to build a great military project. After he linked the dispersed walls, the Great Wall became a single defensive system and the length of it extended for more than 10,000 li. This is where the name of Wàn Lĭ Cháng Chéng originated from, translating to ’ten thousand li long wall’.

9. The Great Wall Is a World Treasure

The Great Wall of China was listed as a World Heritage Site in 1987. It was also chosen as one of the New Seven Wonders of the World on July 7th, 2007 in Lisbon, Portugal. Since then, the Great Wall has become a symbol of China and is well-known throughout the world.

10. The Best Seasons to Climb the Great Wall Are Spring and Autumn

April, May, September, and October are the best months to climb the Great Wall. You can choose the tour time, however, to suit your preferences. Spring is the new start of a year, and the plants and flowers on the Great Wall begin to sprout. The comfortable weather makes it enjoyable to climb. Fall is the most beautiful season to visit the Great Wall — the autumnal colors on the mountains and the cool temperature will impress you. 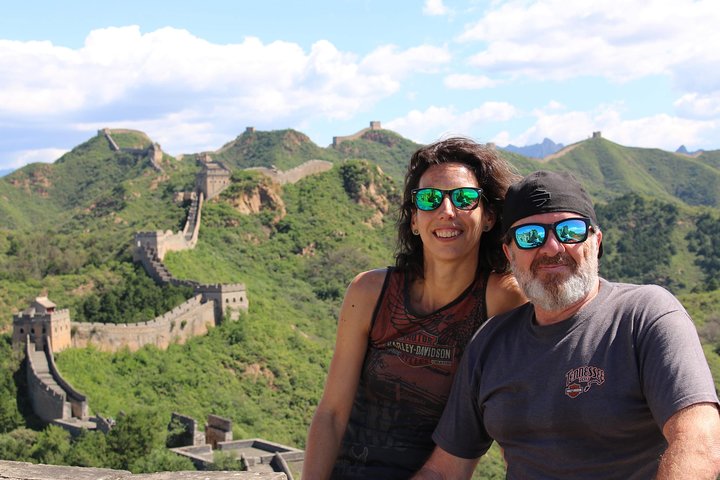